JOIN ME IN AN INTERVIEW WITH BAIA DZAGNIDZE FROM TBILISI, GEORGIA!

Baia, a local of Tbilisi is a journalist by profession, whose love for travel made her slightly change her career. Now, she is writing travel-related articles for various print and online publications. Additionally, she maintains a bilingual travel blog, where she documents her travels. On her blog you will find tips and tricks for travelling on a budget and guides to well-known and less-known destinations. 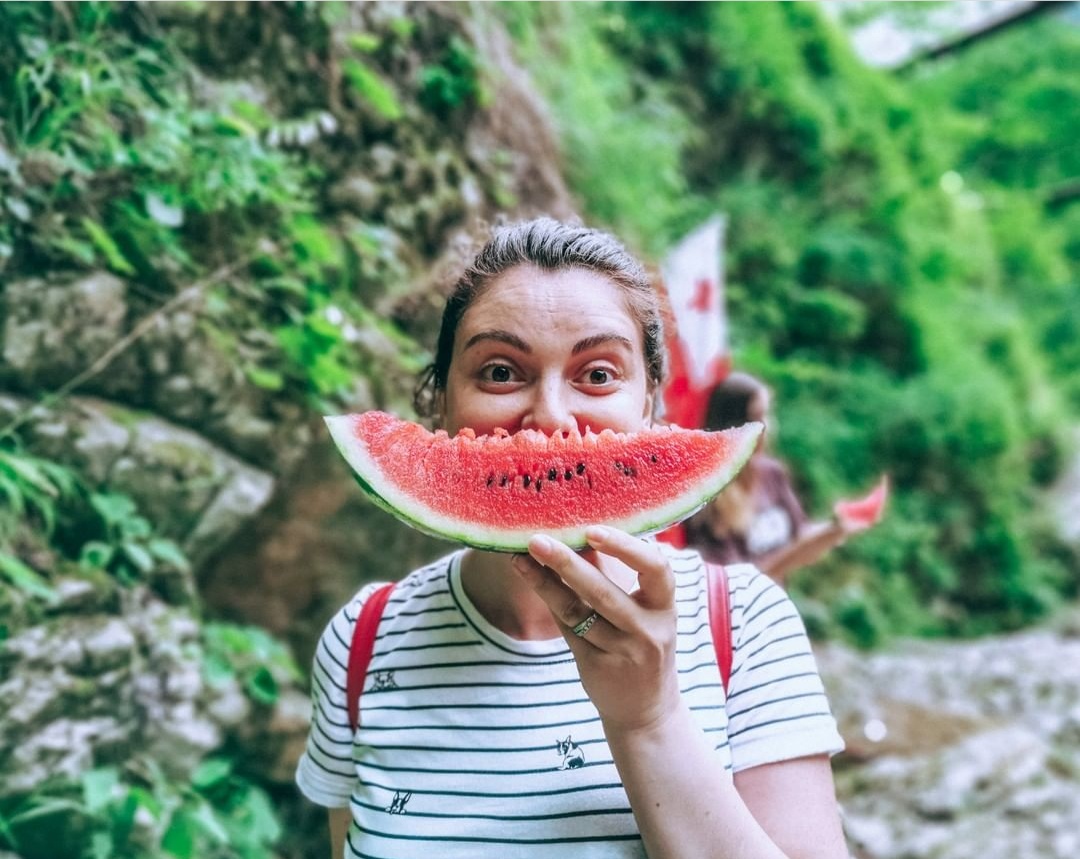 The Republic of Georgia is located in the Caucasus Region of the world which is the area between the Black Sea and the Caspian Sea. Other countries in this region are Azerbaijan, some parts of Armenia and also Russia. The Caucasus mountain that divides Georgia and Russia is the largest mountain range in Europe.

Georgia (also known as Sakartvelo by locals) is located at the intersections of Western Asia and Eastern Europe. Though people of Georgia identify themselves as Europeans, culture and architecture of the country swears of Asian origin. The renowned ruler of the former Soviet Union, Joseph Stalin, was also born in Georgia and is referred as Georgia’s famous son by many.

Set deep in the valley of Mtkvari river, Tbilisi is the capital and largest city of Georgia. You can see a reflection of Georgia’s long dramatic history of Russian and Persian rule all over Tbilisi. The city was found in the 5th century and since then has undergone many restorations and expansions. Old charm and modern architecture makes Tbilisi a fascinating city with a lot to offer and for all kind of tastes.

It has infinite number of things to keep you busy – taste the local wine, relax in sulfur baths, stroll through the National botanical garden, meander the narrow alleys, wander around cute courtyards, experience Georgia’s techno clubs, browse through the art and antiques sold in bazaars and visit the countless churches. The list is long.

People tend to shun Georgia in winters, how cold does it get in the capital?

If you are after snow-covered cities, Tbilisi is not a destination for you in winter. It rarely snows here, and when it does, it quickly melts. The temperature rarely goes below zero, so it’s not cold here in the winter months. The city is prettier in spring or summer. Those who travel to Tbilisi in winter are mostly ski lovers who flock to our ski resorts like Gudauri, Bakuriani, Svaneti, or Goderdzi. Set at a distance of 120 km from Tbilisi, Gudauri is considered as one of the best ski resorts in Georgia. It takes only a couple of hours to get there from the capital.

Which is the most convenient and favoured transport of Tbilisi?

Renting a car is an excellent option if you’d love to go outside of the town and explore nearby sights. Otherwise, all the landmarks in Tbilisi are easily reachable by walk or public transport – subway and bus. Since Tbilisi has a small metro system, some places in the city can be reached by buses. Some of the most important metro stations from where you can easily find buses to city and outskirts are Didube and Station Square 1.

There are only two options, unfortunately, for travelers to get to the city from the airport – a taxi and a bus 37. The bus is not an overnight one and operates from 7 a.m till midnight, so those who come between those times will have to take a taxi. Usually, taxi service is not expensive in Tbilisi, but be cautious as drivers tend to scam tourists and ask for a ridiculous amount for a short trip. I would recommend getting a local sim at the airport and ordering a taxi by an app – Yandex, Bolt, or Smart Taxi. The latter has terminal machines so you can swipe your debit/credit card. Others do require to attach it in the app to pay with the card.

What are the best day trips for nature, culture, and history from Tbilisi?

Some of the best day trips you can take are to Mtskheta (mush-ket-ah), a former capital and a UNESCO World Heritage Site. Situated to the north of Tbilisi, it takes around forty minutes to reach there by a car. You can also use metro till Didube bus station, from there take a minibus or marshrutka (as locals say) for an easy twenty minutes ride to Mtskheta. Svetitskhoveli Cathedral, Jvari Monastery and Samtarvo are some of the most famous places to visit in Mtskheta.

Stepantsminda is known for its gorgeous and breathtaking Gergety Trinity Church that sits at the bottom of Mount Kazbegi, which is the third highest mountain in Georgia. Kazbegi was intially called Stepantsminda after Georgian Orthodox monk, Saint Stephen, however the name was changed to Kazbegi after Alexander Kazbegi, a Georgian writer and poet who wrote the The Prose of the Mountains: Three Tales of the Caucasus. Just like Mtskheta, you can catch a marshrutkas from Didube station or rent a car from Tbilisi. Journey time will be around four hours.

Telavi or Sighnaghi in Kakheti region are great cities to learn more about Georgian wine and visit wineries and family-run cellars, along with discovering historical sights. Located just two hours away from Tbilisi, Sighnaghi is also called the ‘City of Love’. It is an attractive town which has undergone changes in recent years to become a weekend getaway for many in the capital. Sighnaghi is much smaller compared to Telavi and around sixty kms apart but both are beautiful and worth visiting. To reach Sighnaghi take a marshrutka outside the Isani and Samgori Metro Stations.

Additionally, you can visit cave-towns like Uplistsikhe and David Gareji. Uplistsikhe is an ancient town located to the west of Tbilisi. To reach Uplistsikhe take a marshrutka to Gori from the Didube station. Journey time is around an hour and a half.

On the other hand David Gareji is an ancient city located two hours away from Tbilisi towards the east. To reach take a shuttle from Liberty Square in Tbilisi which departs daily at 11:00 am and returns at 7:00 pm.

To know more about Tbilisi, check our other interview with a local.

What are the top three must-visit restaurants in Tbilisi?

My top favorite Georgian restaurant is Shavi Lomi (Black Lion), where you can try typical Georgian meals with a modern twist. Make sure you try the Gobi, a plate will of various appetizers like spinach, green beans, beetroot, and carrot with walnut paste that comes along with cornbread (mchadi) and local cheese.

For meat dumplings, Khinkali, make sure to go either in Zodiako or Dukani, both very close to Rustaveli Avenue. In Zodiako, you can also try nadughi (ricotta-like cheese) dumplings; they are delicious! While in Dukani, you can try hand-wrapped dumplings, very rare these days.

If you are looking for a fancy restaurant that serves local cuisine, try Barbarestan. A family-run restaurant revived recipes from a 19th-century first cookbook.

What are the top three local night clubs in Tbilisi which tourists must check out during their stay?

I am not a big fan of night clubs, but Bassiani, Cafe Gallery, and Spacehall are the leading clubs for party-goers.

The legendary Bassiani is the largest nightclub in Georgia and is quite unusually located in a vacant swimming pool under the Russian made soccer stadium Dynamo. It is open only one night in a week. Cafe Gallery is a cafe plus night club with a chilled out atmosphere. You can even buy art there. Space hall on the other hand is a large space for concerts, live bands, electronic music and other kind of performance.

Where to head for shopping in Tbilisi? Are there any popular weekend/night/flea markets which tourists must visit?

Tbilisi has several shopping malls to go shopping, such as Galleria, Tbilisi Mall and East Point.

During spring and summer, every other Sunday, Deda Ena park hosts open-air flea markets, where you can buy handmade crafts, second-hand clothes, accessories, and many more.

On weekends, near Freedom Square (also called Liberty Square) metro station, you can find a market called STALL, where you can find products of small entrepreneurs or artists selling their handmade accessories.

Which is the local craft or souvenir of Tbilisi?

There is no specifically designed souvenir of Tbilisi except the magnets and postcards. However, if you’d like to take something Georgian back home, I would suggest Lurji Supra, or blue table cover, adorned with local elements. However, there are also white and red colors, if blue is not your favorite.

Can you suggest a place where one can get the best view of the city?

Views from Narikala Fortress over the old town and Abanotubani is absolutely mind-blowing. But, if you’d like to have a 360 panoramic view of the whole city, make sure to go to Mtatsminda Park with a funicular during the dusk. It’s quite magical too to see the city being lit up as the sun starts to set.

Would you suggest any shows in Tbilisi to drama, music or art lovers? Where can one spot street art in your city?

For those who like musicals and want to learn a bit more about Georgian culture, customs, and traditions, I suggest Welcome to Georgia.

Rezo Gabriadze Puppet Theater for adults is also a great place if you are looking for a cultural experience in Tbilisi. However, tickets often get sold out, so be quick to buy them online!

Street art is slowly developing in Tbilisi. Most of those pieces are scattered across the city, but Hero Square and Baratashvili Bridge underground passages have some of the beautiful street arts you can find in Tbilisi.